A History of Antony Nunn Agencies

Antony Nunn Agencies was started by Antony Nunn in 1998. Antony started working in the Toy trade in 1971 for a large toy importing business, Cowan de Groot of London. Following this, Antony moved to ‘The Russian Shop’ who were retailing all Russian goods. 2 years later, armed with these experiences, Antony moved back up North to his roots and joined the family retail business of Redgates. During this time Antony was in charge of Redgates’ wholesale division, Wilson Gumpert. WG provided a showroom for shop keepers and other retail buyers to view the goods and place orders. Redgates and Wilson Gumpert was instrumental in the founding of Buying group Toymaster which continues strongly today. After this period and the sad closing of Redgates and Wilson Gumpert in 1988, AM international was founded to primarily distribute dolls, children’s toys, nursery goods and humorous garden gnomes! After 10 years, in 1998, Antony went on to forge his own path and Antony Nunn Agencies was established. Antony’s son Patrick joined the business in 2009 and the business continues under their leadership. The brands we currently distribute and work with are; Goetz Dolls, LILALU, Reutter Porcelain, Fridolin, The Bean People and GeoBender.

To understand the full history of ANA we must go back to the start, the year 1857. Edwin Redgate opened the first store in Fargate, Sheffield selling furs and sewing machines.

1890 onwards Redgates sold fur pram covers and around this time the first wheeled toys were introduced. 1895 William Nunn married Edwin’s daughter, Annie Gertrude and William later became a partner in the business, tying the two families together for the rest of history. William and Annie had 9 children, as was the norm to have such large families in that period. 1914 saw the start of World War 1 when the children were rather lucky as they were too young to serve their country.

All the children took an active role in the business but the most involved was the eldest, George Nunn. Fast forward to 1925… the store moved to Moorhead for the first of 2 re-locations, but in 1940 it was badly damaged in the Sheffield blitz and moved to Ecclesall Road. 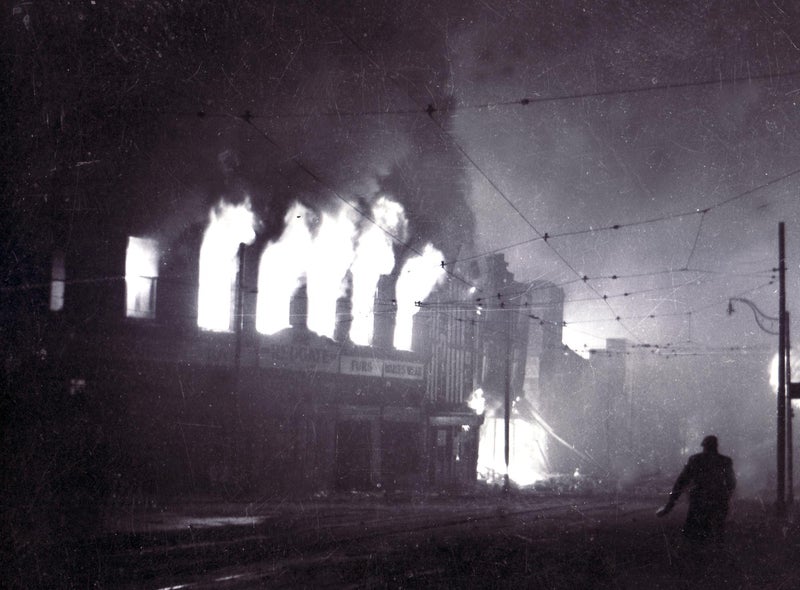 George had 2 Children, Michael born 1926 and Andrew born 1933. Michael served (post World War 2) due to national service and was stationed in Egypt. Andrew served as a dentist in the Army, stationed all around the world and finally in Germany. 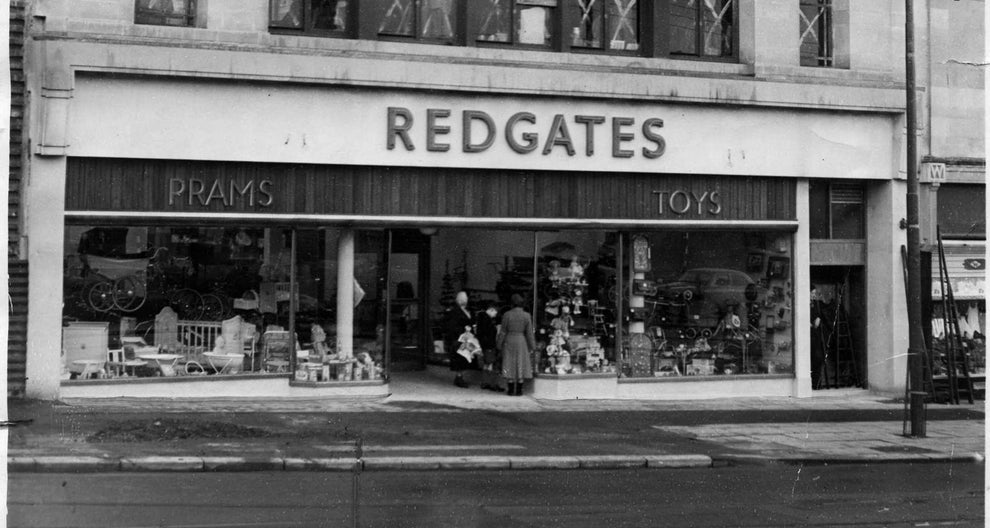 Above Redgates store at Moorhead. 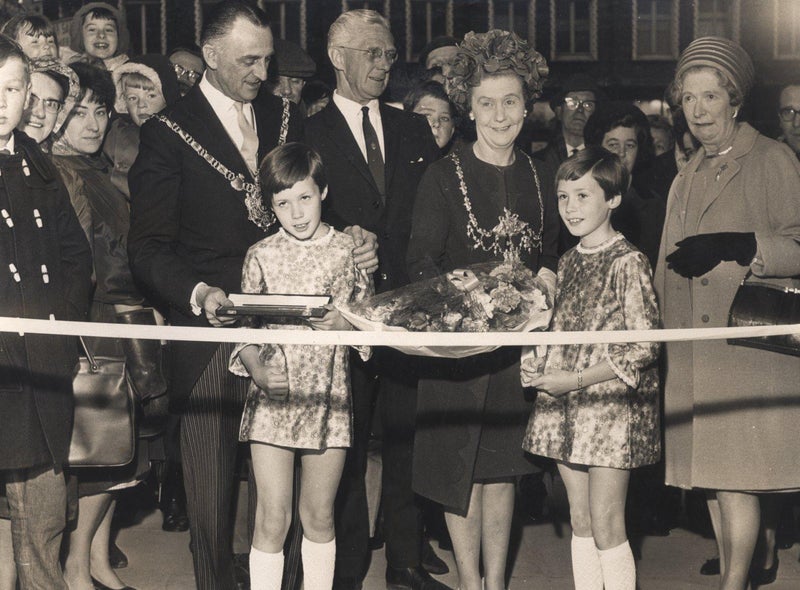 Redgates continued to prosper and build on the reputation it had created in the years before. The reputation of Redgates really started to increase in 1960 in the local area and it became known as the best Toy shop outside of London and was lovingly referred to as the Hamleys of the North. Many celebrities came to visit their fans in the shop and to sign products. 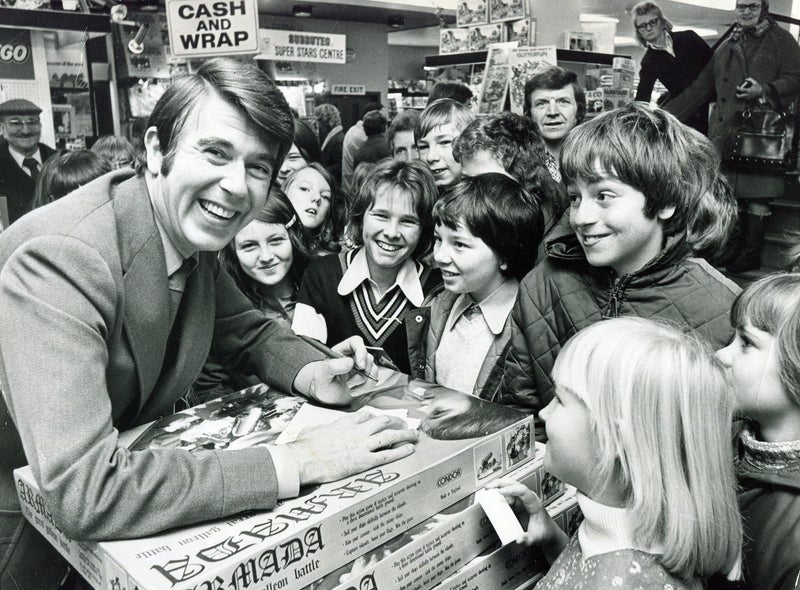 Above: TV presenter Leslie Crowther comes to visit Redgates, surrounded by a crowd of youngsters in Nov 22nd 1975. 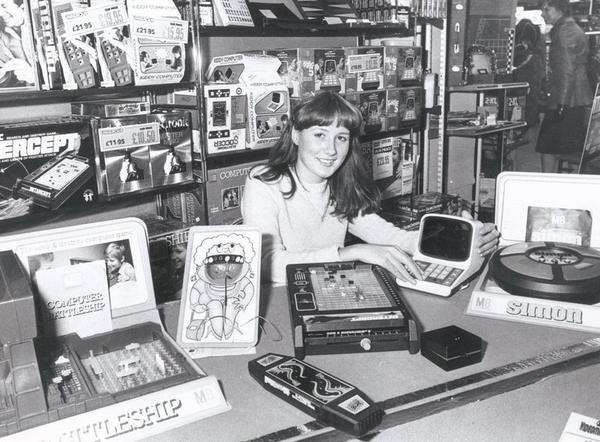 Above: Twin daughter of Michael Nunn, Mandy, sister to Antony in November 1979, working in the store. 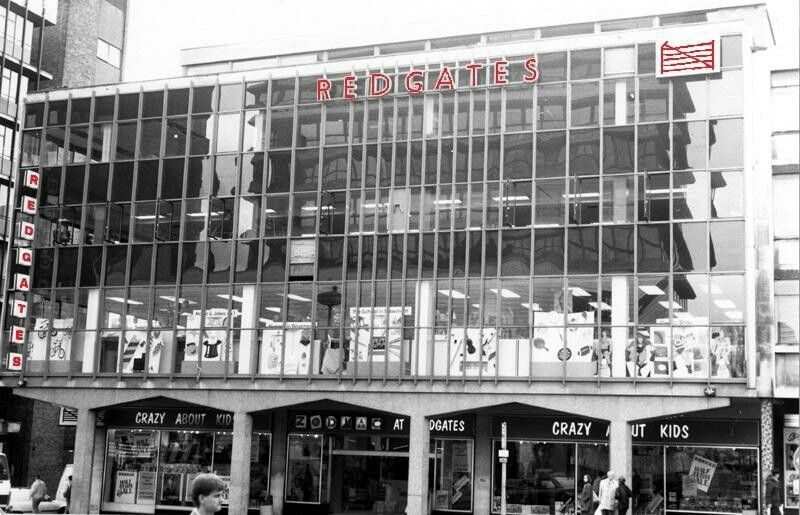 Above: the front of Redgates, its most remembered location, Furnival Gate in 1986. 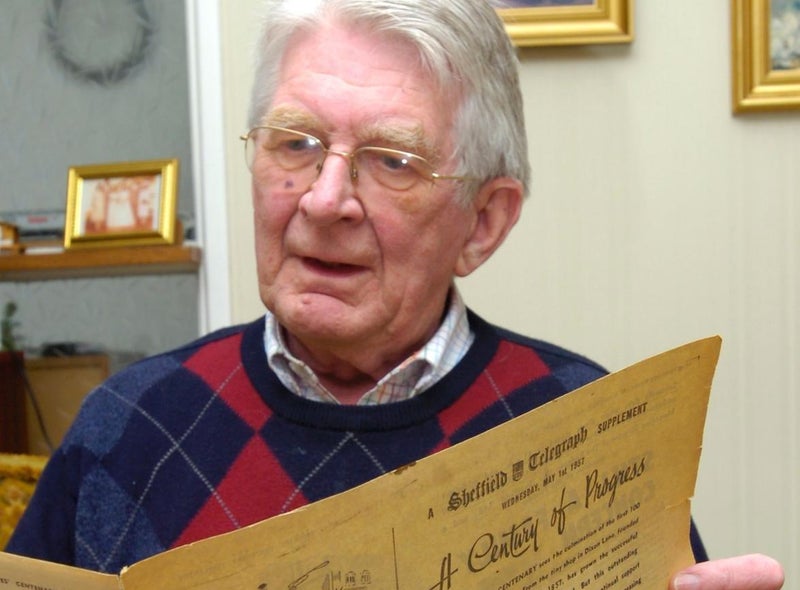 Above: Michael Nunn pictured in 2010.

Around the late 60’s, George was still involved but Michael started to have more involvement in the business. He travelled yearly to Nuremberg Toyfair and this is where Michael met a doll manufacturer named Goetz and Redgates/Wilson Gumpert became their UK representative and distributor. Their dolls and accessories continue to be distributed by Antony Nunn Agencies.

The story of this side of the family is very interesting in its own right:

Goetz Dolls was established in 1950 by Franz and Marianne Goetz. Production started in their parents’ front room with Marianne’s parents providing base knowledge of making dolls and Franz selling and delivering their handmade originals. Franz and his brother Hans with their parents had escaped the Nazis from their German village in what is now Romania through Hungary with many other thousands of refugees and finally were able to settle in Marianne’s home village that for many generations had been the cradle of dollmaking. Hans emigrated to US after being liberated from a Russian POW labour camp having learnt enough English to enable him to find employment in US. Franz was too young to be made to join the army, managed to escape from German soldiers at the end of the war, trained to be a teacher and then dollmaker. They have two daughters, Silke and Anke. Silke went on to marry Antony Nunn and moved to UK, has two children Charlotte and Patrick and Anke together with her husband Uwe Beyer continues to very successfully run the family business.

In 1963, Hans brought his family back to Germany from US to join the growing business and as fluent speaker of English met Michael Nunn. After many meetings, Redgates / Wilson Gumpert started to import and distribute Goetz products in the UK.

Goetz was approached one very early morning by Mrs. Pleasant Rowland who had founded ‘The Pleasant Company’. She was an author, had written stories now widely known as ‘The American Girl’ and wanted to develop a doll that helped tell the stories. This concept proved to be very successful, going from 300 pcs as an initial order to the final order of 1 million pcs., continues to be world renowned and is now run by Mattel.

In 1986 after 129 years, Redgates was sold to UK chain Zodiac Toys who then in 1988 had to shut the store. The building remained unused until its sad demolition in 2018, to be redeveloped. During the demolition phase, a lot of interest revived within the Sheffield community and ignited a lot of fond memories. Maggie Nunn, the wife of John Nunn who was an associate Director worked hard to keep the legacy alive and make sure the institution of Redgates in Sheffield was recognised in some way. She said: “There is so much love and affection for Redgates in Sheffield that it would be great for the new building to be known as “The Redgate Centre”. "It would mean an awful lot to the family. 52 members of the family had been involved as shareholders, about ten family members actually worked there so it would be great for them. "But it would also mean a lot to the people of Sheffield because everyone of a certain age has memories of the shop."

The below link shows a nice short video that BBC Sheffield did with Maggie.

The former site of Redgates is now owned by developers Aberdeen Standard Investments who in 2019 confirmed that they would install a plaque somewhere on the new building.

After all of Maggie’s hard work to ensure the memory lives on, this plaque was unveiled on the 25th February 2020 on the new H&M building. 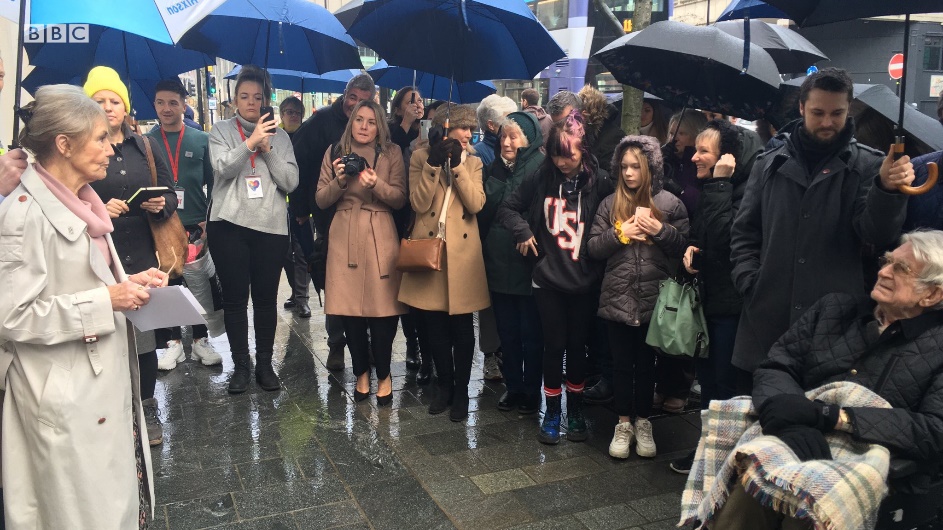 Above; Left Maggie Nunn, Right Michael Nunn with a crowd to see the unveiling in the rain! 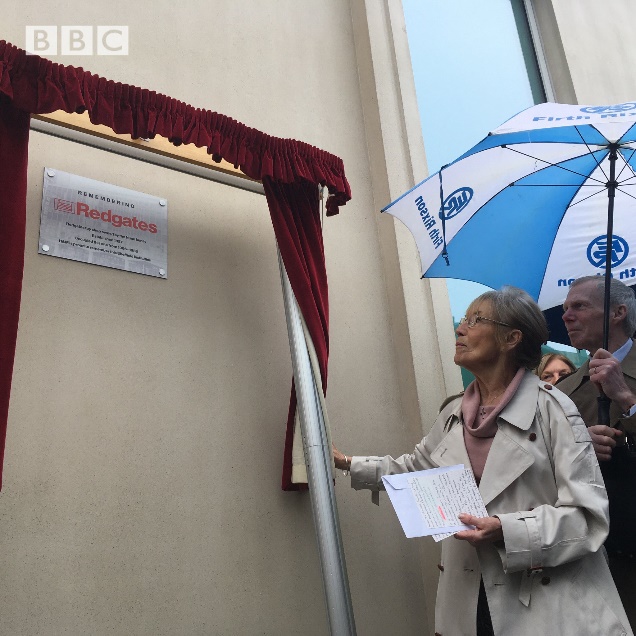 Above; Maggie Nunn unveils the plaque. 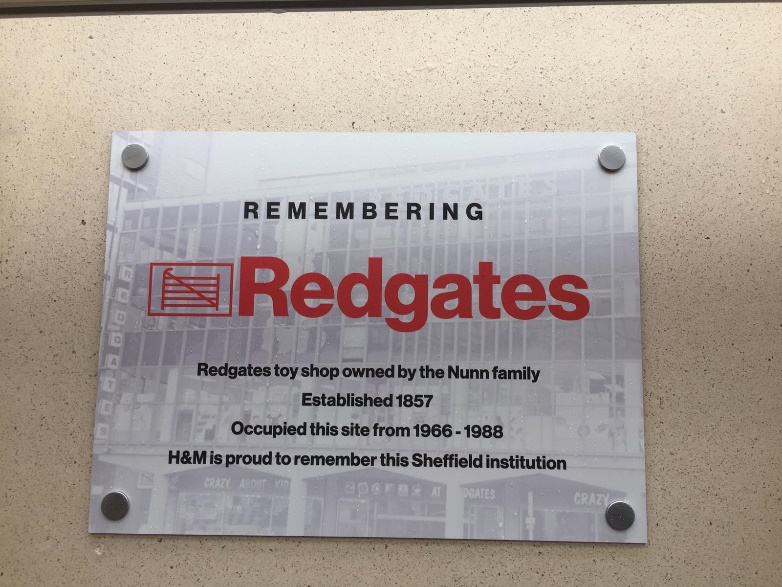 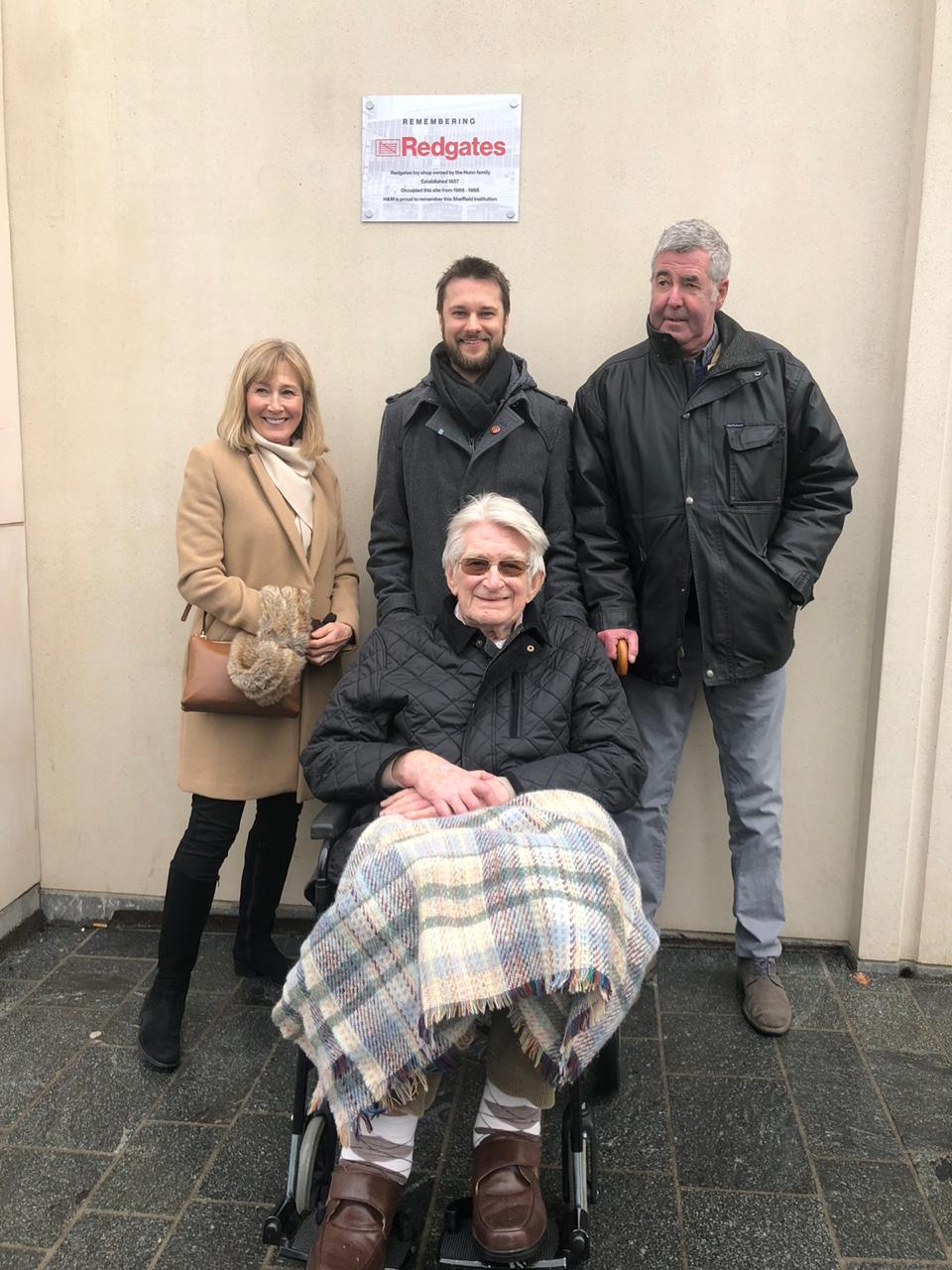 So, from start to now 2020, Patrick is the 6th Generation in the toy trade, started all the way back in 1857 from Edwin to William to George to Michael to Antony.

Many blogs have been created for people to relive, remember, regale their very own experiences and memories. Some of them can be seen here: